Well, folks, here is the greatest Rock’n’roll Band to ever walk the surface og this planet with it’s show in Rutherford, August 1st, 2019, and they still ar rough and unpolished just as a Rock’n’Roll band should be! ENJOY!!!

Let’s Spend The Night Together

You Can’t Always Get What You Want

Sympathy For The Devil

Before They Make Me Run

Midnight Rambler, Start Me Up

After the bows, the band left the stage as the giant screens read:
“SEE YOU SOON!”

According to ear-witnesses, they rehearsed Tumbling Dice, IORR, Under My Thumb and Out Of Control…

“Due to the weather forecast, the Rolling Stones Hard Rock Stadium show scheduled for Sat Aug 31 has been moved to tomorrow night, Fri Aug 30. All tickets will be honored for the new date. There will be no opening act – doors will open at 6PM ET & the Stones will go on at 8:30PM ET.” 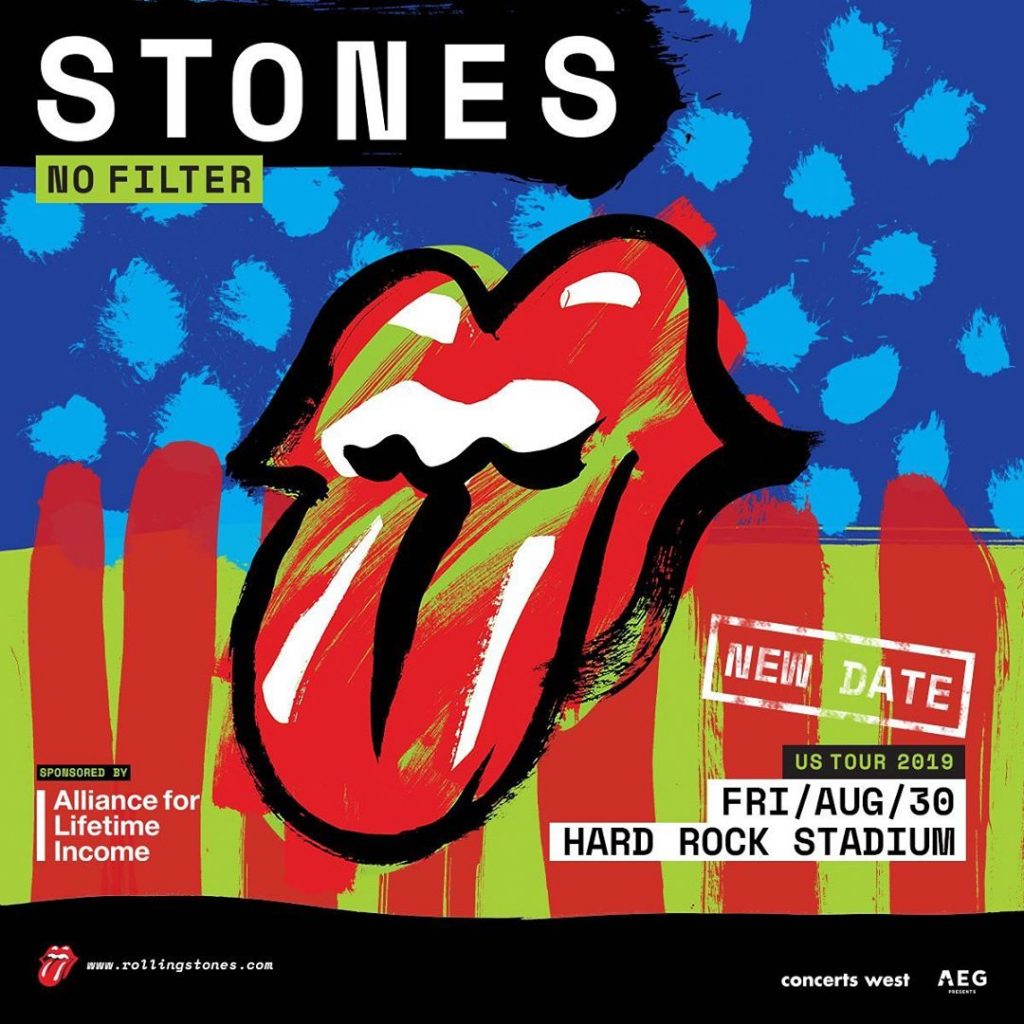 See the stage being built from the view of the stadium’s weather (!) cam – now in doube fast time since the date was shifted one day earlier…

MIAMI song vote: (beware: the date is still “August 31” over there)

Due to the weather forecast, the Rolling Stones Hard Rock Stadium show scheduled for Sat Aug 31 has been moved to tomorrow night, Fri Aug 30. All tickets will be honored for the new date. There will be no opening act-doors will open at 6PM ET & the Stones will go on at 8:30PM ET.

… the Stones show in Miamy!?

Will the threat of Tropical Storm Dorian do the Stones in again? […] forecast is uncertain how much the region will feel as Dorian makes its way across the Caribbean and toward Florida. “Everything is moving forward as planned,” a band spokesperson said late Tuesday afternoon.

According to the Tuesday National Hurricane Center advisory, South Florida is in the forecast cone. On Tuesday, a hurricane warning was issued for Puerto Rico and the Dominican Republic as Tropical Storm Dorian continues on a northern course with winds at 50 mph. If Dorian survives its trek through the Caribbean, South Florida could see storm conditions this weekend.

=> miamiherald.com – Will the Rolling Stones concert survive the threat of Tropical Storm Dorian?

The Press:
=> eu.azcentral.com – The Rolling Stones are raw, scrappy and unpolished in concert. And that’s how it should be

=> eu.azcentral.com – Like the Rolling Stones, time is on my side (c’mon, Mick, notice me)

=> liveforlivemusic.com – The Rolling Stones Offer Up Fan-Requested “Get Off Of My Cloud” In Arizona [Videos]

=> phoenixnewtimes.com – The Rolling Stones Brought a Spectacle to Glendale

Last gig before the last gig of this tour, we are ready for another beautiful night with The Rolling Stones!

Ronnie greets us, ready to go on stage: 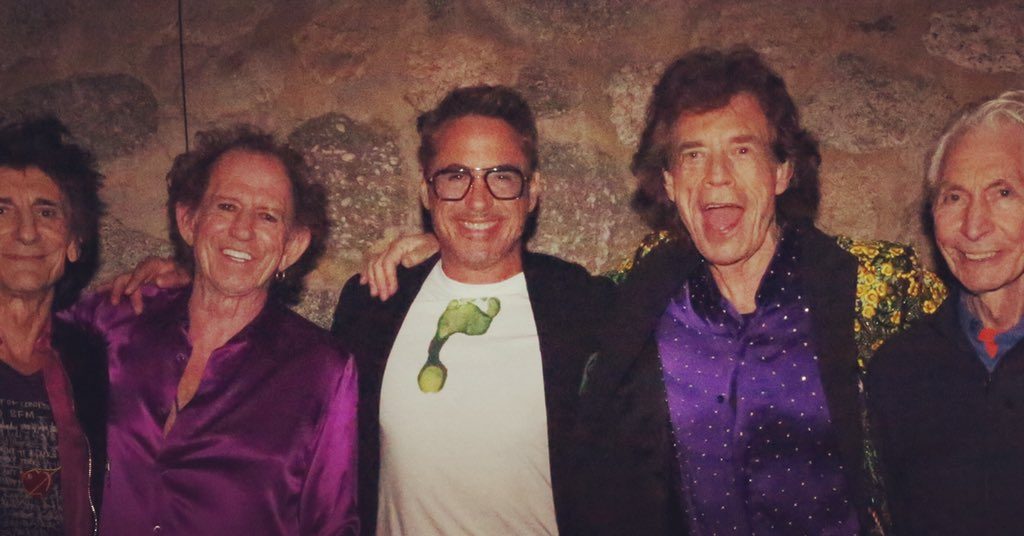 Some pics from the show:

=> Ronnie greets from the limo…

Arriving for soundcheck ~ see you out there later 🎸 @RollingStones @RoseBowlStadium ☀️ pic.twitter.com/HKo5MYqNCu


While waitung for the first chords, got tome for a little riddle? Here’s one from RD Jr.:

Good morning Pasadena and the LA area! Are we ready for the Rose Bowl show this evening?! #stonesnofilter pic.twitter.com/4oESl7TU4x

Ok, so here we go again: the song-vote is still up, so go there and vote:

=> californiarocker.com – The Rolling Stones are Ready for The Rose Bowl in Pasadena, Are You?

We’re down to the last three US shows on this leg of the tour! Cast your vote for which song the Stones will play in Pasadena tomorrow night – we’ve got some absolute classics for you to choose from! Head to https://t.co/Qgxwn95TRi 🗳

The Stones deliver – still and with 100%. 3 shows left on this leg of the No-Filter Tour …

=> sanfrancisco.cbslocal.com – Photos: The Rolling Stones Bring Their No Filter Tour To Levi’s Stadium

What a wonderful evening in Houston, July 27 with the Stones! Very worth for a revisit now and then… 🙂
So here we go!

Ladies and Gentlemen – The Rolling Stones!

2) Let’s Spend The Night Together

9) Sympathy For The Devil

Another great evening ahead!

Santa Clara we are ready for ya 🎸🎸🐶🎶🥁 @RollingStones pic.twitter.com/EmQO4EvmC6

Aaaaand the song vote is up!

Just play them all, for fuckin’ chrissakes!

The stadium has some useful infos for us, just click the pic:

… some nice reads to keep you in the mood …

=> seattletimes.com – The Stones roll from the covered Kingdome to the open air of CenturyLink Field

=> westword.com – Reader: He Might Look Old, but Mick Jagger Totally Rocked It

Says Jaime: Absolutely, it was the best concert I’ve seen in my life…truly an amazing show.

Responds Kelly: As long as the Stones are still out there, the rest of us remain young (at least young at heart). Glad to read their tour is getting great reviews.

Adds Greg: They still give one of the greatest live performances of all time. Mick has more energy then anyone I’ve ever seen.

Replies Pat: Wow, he looks like he was rolled and stoned!!!!

Notes Nicole: The dude is old; does everyone expect him to look anything but? He totally rocked it and we loved every minute of the concert. I thought part of the greatness was watching these old men killing it on stage.

… some pre-show impressions … more coming up