What should the band do now?

Charlie has passed away and the future of the Rolling Stones is now uncertain, as Brian has said once almost with the same words.

Charlie himself suggested Steve Jordan as his replacement or the US tour and until he could take the drummer’s place in the band again. The official announcement read that he is “working hard to get fully fit” and “After all the fans suffering caused by COVID I really do not want the many fans who have been holding tickets for this Tour to be disappointed by another postponement or cancellation.” Here’s the official tweet: 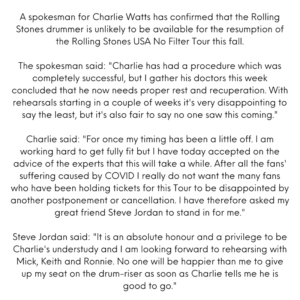 What will happen next? What will be the decision of Mick, Keith and Ronnie? There will be some official statement, soon, but what do you think?

Many fans say “No Charlie, no Stones” and both Keith and Mick have said, that without him, the band is no longer the same. so what should they do??

In my humble opinion, they should do both tours if possible and maybe quit thereafter. Why? I for one think, that nothing stays the same over any period of time. So after Brian, Mick Taylor, Stu, Bill Wyman, Bobby Keys and now Charlie left the band in one way or another, the band did and should play on for these months and next year, or even as long as they can. The Stones with Steve on drums (and Daryl Jones on bass) is just fine with me. They will sound slightly different, that’s for sure, but that is just natural. They played better and less better gigs even with Charlie before. And being the musicians they are, I for one hav no problem, should they continue this and next year. I’m convinced, Charlie would want them to do this.
Again, that’s just IMHO …

August 26 Update I: According to The Mirror it sems like the band wants to continue the tour:
“They will want to honour him and celebrate his amazing musical legacy. They will want to do Charlie proud.”

The same tells RollingStone | the US Sun | the Irish Sun |

I have no words.

Our and my very dear condolences to Shirley, Serafina and Charlotte
and all of his family and friends, and the band!

All things must pass. So do we, and so do they. We all knew it.
Nevertheless, I’m devastated, have no words.
Then I am incredibly thankful for the man, too, and his swing he gave to the band and us, for so many, many long years. How incredibly lucky we were and still are – to be fans of Charlie and his band!

This is really hard. Let’s stay together as long as possible. And enjoy it.
And I thank you all!!! 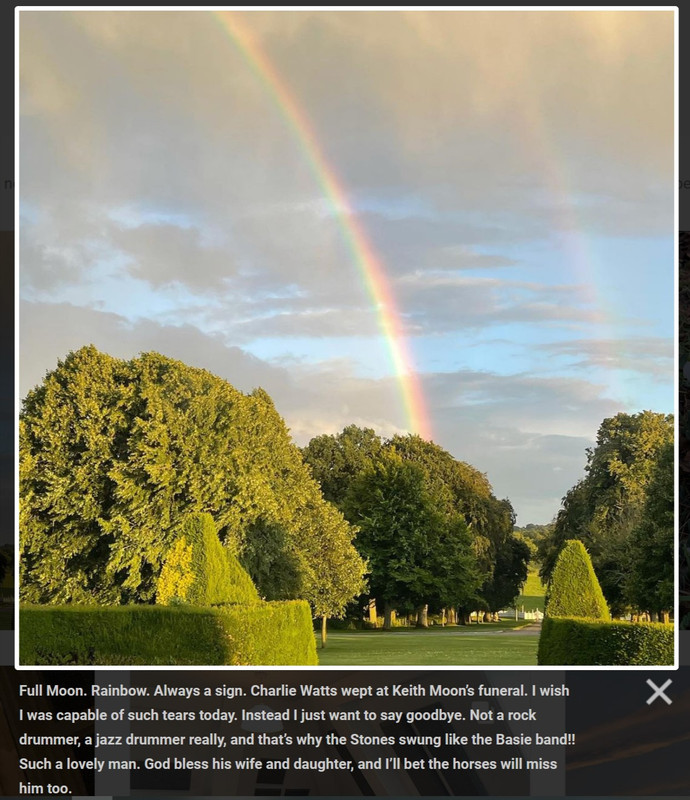 The 40 anniversary edition of Tattoo You is out! 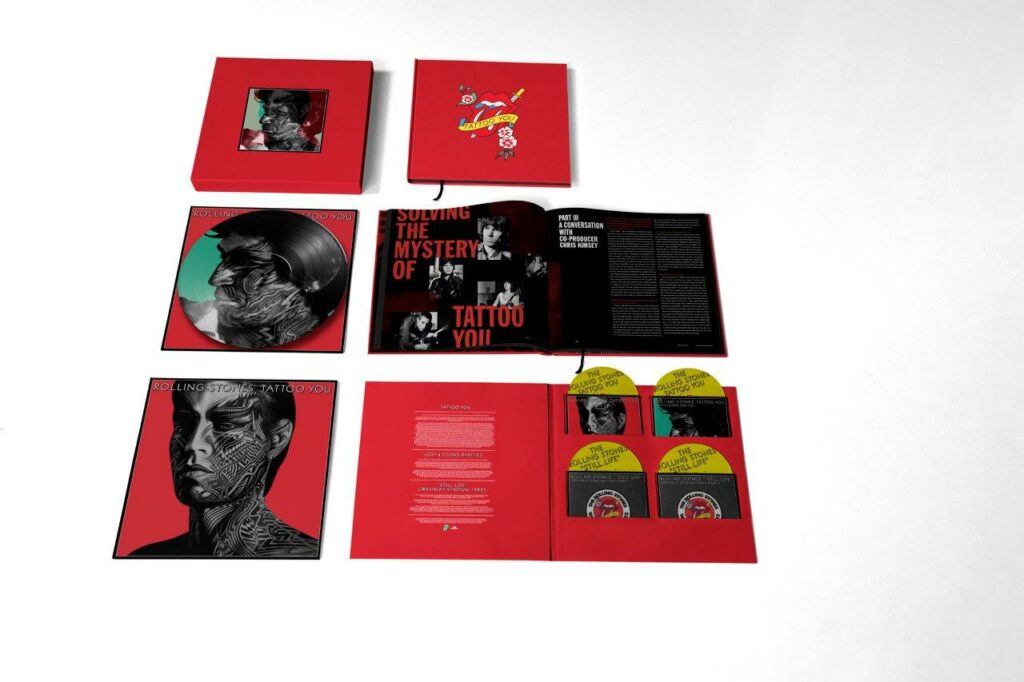 More on this soon…

Living In The Heart Of Love

Yesterday, August 10, Ronnie (and Sally!) once again supported tuskliontrail.com like he has done since the 90ies. He showed his support as a lifesize lion figure which he painted. Sally, together with Jess Power, showed their painted lion, too.

Prowling through the heart of London past some of the West End’s most iconic cultural landmarks, the City’s pride of 27 life-sized lion sculptures includes a spectacular array of artworks by some of the world’s foremost artists, musicians and comedians.

The press: Nice TV report by itv.com with Ronnie and Sally | metro.co.uk |

Sad news once again: The Jazz Fest is cancelled!

“As a result of the current exponential growth of new COVID cases in New Orleans and the region and the ongoing public health emergency, we must sadly announce that the 2021 edition of the New Orleans Jazz & Heritage Festival presented by Shell, scheduled to take place October 8–17, 2021, will not occur as planned … We now look forward to next spring, when we will present the festival during its traditional timeframe“

This tour really is a tough one for the Rolling Stones, even before it started. But I really don’t get it: why don’t people get their vaccine and play it save??? In Louisiana  less than 38 percent of the population is vaccinated. WHY? I’m really puzzled. 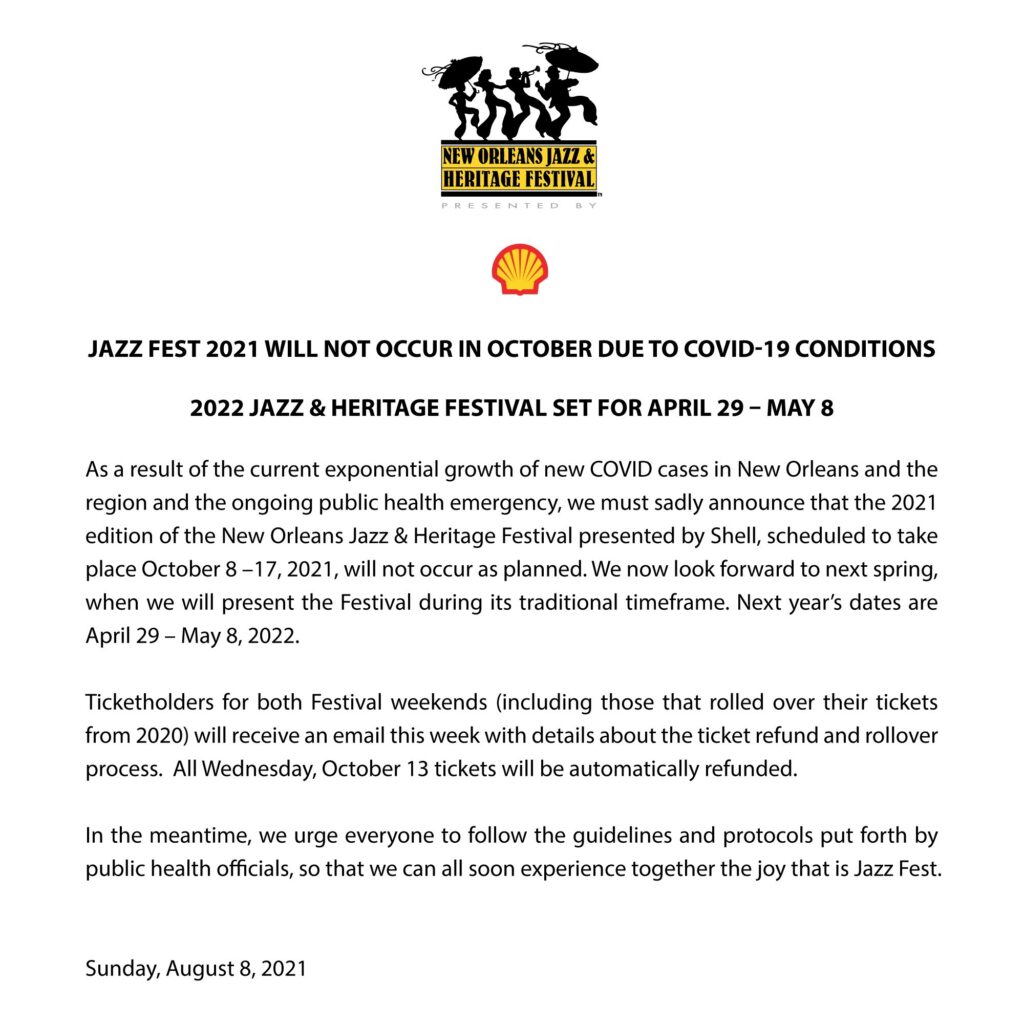 French magazines “Paris Match” and “Ladepeche.fr” have some very interesting news for us:

“Woah! This is GREAT NEWS! Indeed!”

Namely, the festival of Garorock in Marmande is mentioned. And the date will be the 26th of June 2022, which is a Sunday..  As for the status of  negotiations, they are ‘well advanced‘, as the article reads. “Even on the verge of being signed“, according to certain sources ladepeche.fr contacted on August 4. In short, they claim that there would be only a few details left to work out and that at this point, “it is no longer a dream but a reality.“

So after the US tour we will have the EU tour, celebrating the 6th decade of live concerts of this band. Truly, this is the gratest Rock’n’Roll band on this planet.

What does this tell us?

Well, first, it tells us, that the band wishes to join us fans once more in the EU and UK once more as long it’s still possible. so we definitely can look forward to a another summer  with The Rolling Stones playing live for us at festivals and stadiums. After 6 decades of playing live for us, what else could we possibly ask for?
The fact, that they still play for us (and themselves, too, of course), is a wonder in itself!

And second, on a less emotional and more business level, we again have to face the fact, that this band is heading the list of the most expensive acts you could possibly book for your party, hehehe …

“At the beginning of July the rock planet took off. When AEG announced to European promoters that the Rolling Stones had agreed to participate in the 2022 summer festivals, everyone pulled out their calculators. With a fee of 5 million dollars per concert, the Stones are the most expensive group on the market.”

More news dropping in in the wake of the upcoming tour.

It has happened before, and now it happens again: six days before the regular tour-start, The Rolling Stones will play a private gig for the Kraft family and their guests at Gillette Stadium, September  20.

Well, let’s hope, that this is not the replacement of the ‘secret gig‘ the band usually plays before the official opening night. This is always a real and great excitement, announced just hours before it happens. In any case, it will be a good opportunity for testing the new line-up, different songs and, of course, add a little extra salary, hehehe … 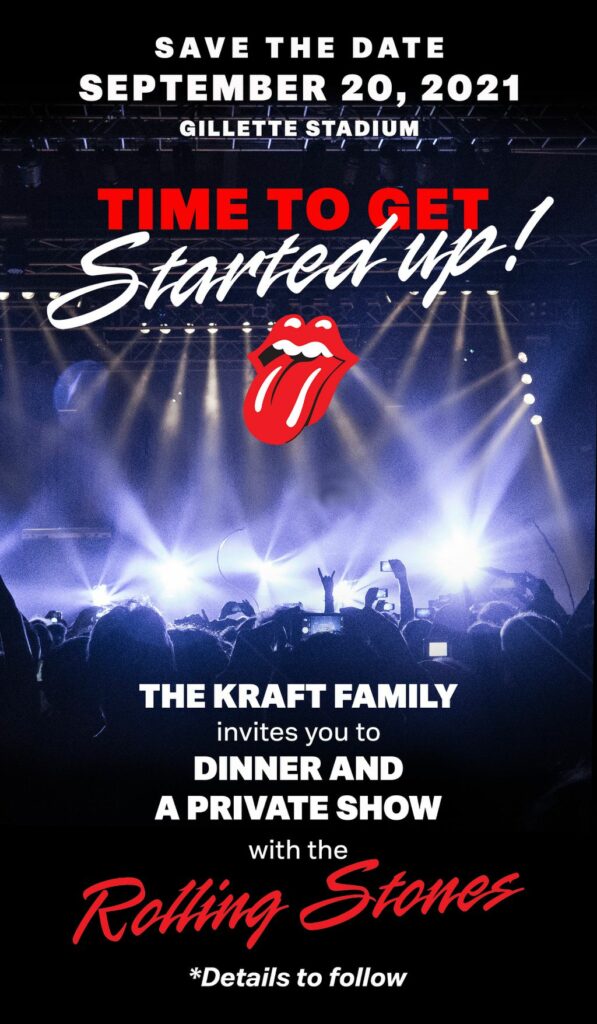 Oh no! Charlie had to be undergo an emergency operation!

That operation however has been fully successful! And that is the most important part.

So get well soon Charlie!

After that operation, Charlie faces ‘several weeks’ of recovery. Thus, he can’t join the band (at least for the first part) of the No Filter US Tour, starting September  26th in St. Louis.

As a replacement, Steve Jordan has already been booked. He’s known to be a friend of the band and was/is a member of the Expensive Winos. Charlie comments:

“I am working hard to get fully fit but I have today accepted on the advice of the experts that this will take a while. After all the disappointment with delays to the tour caused by Covid, I really don’t want the many Stones fans in the States who have been holding tickets to have another postponement or cancellation. I have therefore asked my great friend Steve Jordan to stand in for me.”

“The Rolling Stones aim to have him back fighting fit for the band’s big 60th anniversary celebrations in 2022, when they will release their first album of ­original songs in 17 years.“

To me, that sounds like the official confirmation about the next tour – in the EU this time – and the plans for the looooooong awaited new album…

REHEARSALS will start in a couple of weeks!

We really look forward to welcoming Charlie back as soon as he is fully recovered.
Thank you to our friend Steve Jordan for stepping in, so we can still play all the shows for you this fall. https://t.co/IOoLgIQqND

This has been a bit of a blow to all of us, to say the least and we're all wishing for Charlie to have a speedy recovery and to see him as soon as possible.  Thank you to Steve Jordan for joining us in the meantime. https://t.co/dJbo8D2hRW

Leave a comment, wish Charlie a quick recovery and/or tell us, what you expect from this tour now: