There’s an article over at Billboard.com headlining “Here’s Why Fans Think Dua Lipa Is Hinting at a Possible Mick Jagger Collaboration – Does Dua’s future include even more nostalgia?”

So the article tells about pop star Dua Lipa, who posted photos of her and Mick in the studio last Saturday, where she probably recorded more music. So that could point to another collaboration with ‘nostalgia’ as she already had been working with Elton John before. There’s a pic showing her with Joni Mitchell, too…

Neither Mick nor Dua commented about this. Anyway, here are the two pics from Dua Lipa’s Instagram:

Nice find: Mick Jagger’s Desire to Play Alex in ‘A Clockwork Orange’ Shared by Malcolm McDowell at Beatles Vs. Stones Extravaganza in Turin

The Torino Film Festival, under the direction of Steve Della Casa, launched its 40th edition on Friday evening at the sumptuous Teatro Regio not with a film screening, but with an evening devoted to music. To evoke the links between cinema and music, a talk took place around the theme of the Beatles versus the Rolling Stones, and the bands’ love of cinema, which led them to work with Jean-Luc Godard and Martin Scorsese, among others.

Nice find, this! Go to variety.com, read the rest – some nice details about both bands…

Thanks to Steve [UC] for pointing this out

Lots of friends and famous people greeted Joe who celebrated his 75th birtday on Sunday, November 20.

On Facebook, we can see and hear the many different but always heartfelt greetings to Joe, among them right after Sheryl Crow Keith (at 1:30) and Ronnie (at 1:40).
Ronnie, BTW, greeted Joe “from the studio in LA” ! 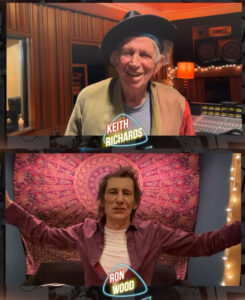 I think, we all can guess what that means – the Stones are still in LA, working on the new album. Of course, that depends, when that greeting of Ronnie was recorded. But we can guess safely, that it was just recently.

Thanks for the tip, Steve – he sent me a note about this … watch the whole thing here on Facebook

This was just released: another one from ABCKO…

The Rolling Stones just released a video on YouTube: 2000 Lightyears From Home of the album Her Satanic Majesties Request.

Another video (ABCKOvevo) is Lady Jane:

… with our trousers down!

Very well said! This is a very recommended read, folks. Actually, I can’t imagine anyone here who has not seen all of this classic pictures of Jim Marshall.

But in case you haven’t – you are so lucky to have a first and wonderful look at some of them in this really nice article from The Guardian:

Go and have a nice look & read!

Another huge release from ABKCO hits the stores and the hearts of any collector! Ronnie on the telephone with british channel GBNews.

Well, GBNews is not particularly my favourite cup of tea, but in this case, it caught my eye. And my ears.

Ronnie is interviewed by Alastair Steward. While he, Ronnie, has just run an exhibition of some new series of his paintings at London’s Kenwood House (see Ronnies blog here for more on this), he is talking to Alastair about his art.

Of course, he’s asked about music, too. And there you have it. Although the sound quality of his telefone connection is really bad, you can clearly hear him answer to the question whether he thinks the gig in Berlin would have been the last time, he either doesn’t want to answer that or just misses the content. So Alastair insists by asking if he would see him again in Hyde Park or Paris or elsewhere? Ronnie said “Of course you will!“

He continues by telling that they are working to finish the studio album that they “have been working on for years“, that they are “bringing that to an end” and that things go on really well now. They just came back from  New York and they’re “finishing it off in LA in a couple of weeks time” and he hopes they will have a “new package to bring” that will be the best for … and here he seems to have to count back until he continues … “the last fiveteen years, I recon” and closing it off by saying that “you will be seeing us live again in the next year, hopefully, too.“

So here we go, folks. Let’s hope for the best. After all, a rolling stones gatheres no moss…