He’s on tour in the UK with Ben Waters on piano and the Mad Lads in honor of Chuck Berry. From the comments in the social media, that gig must have been a great joy for most of the lucky ones who got tickets.

For Ian Gittins from theguardian.com, however, that show was Ronnie’s ‘mediocre homage‘ to Chuck, mostly so because of his lack of vocal brilliance. That’s a standpoint to be considered hitting a truth here, but, IMHO, just (slightly?) misses the point, when it comes down to plain, bare-bone Rock ‘N’ Roll. This music just doesn’t needs nice, classical vocals, although it helps sometimes, hehehe. So Ian writes:

While his love for Berry is palpable, his flat vocal on Little Queenie is valiant rather than virtuoso. On Don’t You Lie to Me, he is near inaudible, buried beneath the gnarly 12-bar riffs.

Well, listen to Exile, and you’ll have plenty of vocals buried deep in riffs, hehehe…

And here’s another review by Christiana Ferrauti from theupcoming.co.uk with a slightly other bend: Ronnie Wood offers Chuck Berry an energetic tribute at Shepherd’s Bush Empire

Ok, on with the show. Here’s 4 pics by by Ollie Millington which Ronnie tweeted and some more from the social media:

Ronnie has designed an edition of 47 Bremont watches.

They sell at a whooping 38.950 £ each. Of course, you can expect high quality standarts for each of them – like a store of value.

For all those who like Ronnie’s art, have a look at all 47 of them at Bremont.com.

Here’s a nice video about how this happend:

GQ Magazine has an article about this, too.

Great music from a legend of Rock ‘N’ Roll, played by the Mad Lads!

Especially see/hear Ronnie, Imelda and the Mad Lads play 3 songs live on the radio! and see them perform Johnny B. Goode at BBC2!

Jim Hynes from the Elmore Magazine writes about Ronnie’s and the Mad Lad’s album:

Among the highlights are Imelda May’s rousing bluesy take on Berry’s “Wee Wee Hours,” Wood’s slide guitar playing on the title track and May again, this time bringing a splendid vocal on “Rock and Roll Music.” May also sings on “Almost Grown.” The energy throughout is strong with an engaged audience on familiar fare like “Back in the USA,” “Little Queenie” and “Johnny B. Goode.” Thankfully we’ll be hearing at least two more installments from this kick-ass band, honoring other musical heroes. Wood is a living legend and Rock and Roll Hall of Famer. He does one of biggest mentors proud with this live set.

Another review: Hal Horowitz from americansongwriter.com: Ronnie Wood’s Mad Lad Tribute To Chuck Berry Is An Awful Lot of Fun

=> Listen to 3 of the songs, Mad Lad, Rock ‘N’ Roll Music and Talking About You: https://ronniewood.lnk.to/ladTW

You can now listen to my new track 'Mad Lad'! Click here to hear it in full: https://t.co/YiGsNPJqqh pic.twitter.com/BdZ4bzt4z8

Recommended: 30 minutes of radio interview with Imelda May, Ronnie and the rest of the buch about the Chuck Berry tribute, also playing a song about Chuck as well as his Wee Wee Hours and Back In The USA live – so enjoy: 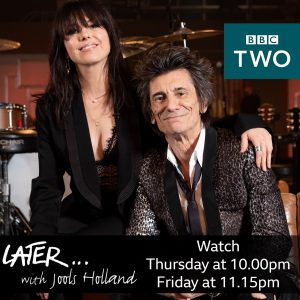 Finally, we get on of the argentinian conderts in full length!

It’s been restored in full, and features a very special guest appearance from Bob Dylan.

Filmed on April 5th 1998, by this point, the band had played to over two million people on the first two legs of the tour in North America and Japan. Amongst many highlights in this show, special guest Bob Dylan joins the band onstage at River Plate for a unique performance of his classic ‘Like A Rolling Stone’.

The band only played a further two dates in South America on the triumphant, year long Bridges To Babylon tour, before they headed back to North America, and Europe.

Order it from eagle-rock.com / amazon.com

Mick’s four albums are She’s The Boss (1985), Primitive Cool (1987), Wandering Spirit (1993) and Goddess In The Doorway (2001). With exception of Goddess In The Doorway, all other albums have been rnewly remastered from analogue tape transfers via the Half-Speed Mastering system by Miles Showell at London’s Abbey Road Studios.

Release date is December 6 – you can pre-order them at udiscovermusic.com or at amazon.com, too. 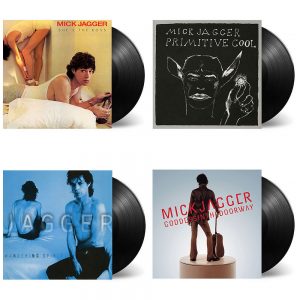 My complete solo album catalogue has been remastered on vinyl and is available to pre-order now – out December 6! https://t.co/swHr4MCZmH pic.twitter.com/7Bmmhk6Euy

a – Mother Of A Man
b – Think
c – Wandering Spirit

Goddess In The Doorway (2 LPs)

a – Visions Of Paradise
b – Joy
c – Dancing In The Starlight

Last show of The Rolling Stones’ US No Filter Tour 2019 took them to the Hard Rock stadium, Miami, Florida, August 30.

The Miami New Times wrote: Despite the Threat of Dorian, the Rolling Stones Perform at Hard Rock Stadium

Not wanting to leave anything up to chance, the Rolling Stones pushed the Miami date of their No Filter Tour up a date to avoid a cancelation due to Hurricane Dorian. On Friday, August 30, fans poured into the Hard Rock Stadium to see the iconic rock back deliver another amazing performance, with Mick Jagger in fine form despite the fact that the North American Tour was postponed due to Jagger’s heart surgery. The Miami shows served as the final stop of the tour that began in Europe.

They also have a nice picture gallery of the show

First: here’s a video of the whole show in one go:

And here’s the show song by song:

8) Dead Flowers
9) Sympathy For The Devil