I received a book by this title and find it rather fun to read!

That’s why I can recommend it as a present for christmas, too. By now, it’s only available in german, so it would suit all of you with german reading skills or your german friends! 😉
(Find the german review below)

From the rear flab text:

Was Brian Jones murdered? How many children did Mick Jagger father and with how many mothers? Who invented the famous tongue? And why does Keith have bad memories about Leonardo da Vinci?
Since almost 6 (!) decades, the Rolling Stones play the stages and are subject of public surveillance. No other band has accumulated that amount of myths, legends, half-truths and wrong facts. True Stones-heads know that Mick and Keith were once locked up in the kitchen by their manager until they would come up with their first own song. But: which song was it?*

*Keith wrote in his bio, that this song was ‘As Tears Go By’, but Hofacker writes that it was ‘It Should Be You‘ – which was not a particular masterpiece and was, though recorded, never released.

On 104 pages you find a nice collection of facts and stories around the history of the band and it’s members. Every page is nicely illustrated and the text is carefully worded. Throughout the read, one is accompanied with a delicate sense of humor, as the stories are told. The book also corrects quite a few of the misapprehensions that have appeared during those 6 decades of Stones history.

I particularly liked, for instance, the list of the 31 kids that the band members have fathered (“The Kids Are Alright“, p. 86/87) – because I’m bad at remembering family branches with all their relationships and names. Another example is the story of Dick Rowe, “the man who rejected the Beatles” (p. 22) in 1962, and who got a second chance a year later, and, of all persons, from George Harrison, who told him to check out that hot young band playing the Crawdaddy Club of the Station Hotel in Richmond…

The articles in this book are packed with information. Ernst Hofacker has done his job, that’s for sure. I’m quite confident, he could easily cover 500 pages more about all those things he must have collected and researched.
You know what? I would welcome it if he does!!

On page 32/33, for instance, he covers the first US tour of The Rolling Stones, which was not at all as successful as the one The Beatles had done just months before. Mind you, this was 1964… For Brian, Mick, Keith, Bill and Charlie, it was a dream come true. But alas, that tour wind down to a really tough experience. The lowdown was the  middle west, way off the coasts where more teenagers even knew their name. As Hofacker writes:

Those gigs were played before mostly empty seats. The crowd in Minneapolis counted to a meagre 400 kids, as was the case in Detroid, Omaha and Harrisburg. In San Antonio, the Stones played an annual fair, where mostly children and Cowboys attended. They hit the stage right after a monkey-training number …
(My translation)

I must admit, I really like those details. I have to confess here before you, that I didn’t knew about that part with the ape training show before the Stones played … uuh, just let me guess how it would sound nowadays:

“After this fabulous ape-number, now, Ladies and Gentlemen, the REAL monkeys:
THE ROLLING STOOOOOOONES!!!!”

You see, I could easily have read much more than those 104 pages only. Maybe, we can convince Mr. Hofacker, to publish some kind of extended version of his nice little book??

Although for the die-hard Stones fan, there are not THAT many new insights or facts that were not known before, but for the vast majority of folks interested in The Rolling Stones and their ongoing history, though, this is a very nice treat and a great way to take a step further to the Stones and the times that were … and still are, actually, their awesome history of Rock’n’Roll. 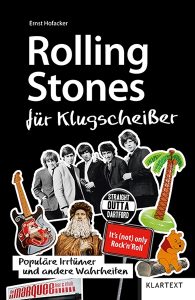 This is a nice book for those interested in the greatest Rock ‘n’ Roll band of this planet! It’s full of facts and corrects popular fake news. It starts right from the beginning of the band. One of the latest entries is the name ‘Rolling Stone’ from Mars that NASA gave to a tumbling stone that was filmed while Insight landed on Mars. NASA has the details.

At blickinsbuch.de you can flip through some of the pages.