The rumors about a 2022 tour of Europe are gathering momentum…

As french paper “20minutes.fr writes, The Rolling Stones could play in Lyon in July and will announce their tour officially on March 9:

This would be this in English: “The Rolling Stones will ignite the stands of Groupama Stadium in Lyon on July 15 or 19, depending on the logistics of their European tour, reports Le Progrès. This will be the only French date of the group, which will announce the details of its tour on March 9.“

But that’s not all, of course. For a couple of days, one rumor centers around a possible tour date in London’s Hyde Park. And that this could coincide with the date that Paul McCartney plays the Pyramide stage of Glastonbury. So this would revive or extend the rivalry between the Beatles and the Stones, or, more recently, Macca and the Stones… British tabloid The Mirror writes:

Promoters AEG are thought to have sounded out Mick Jagger and the band to play the BST Hyde Park show on Saturday June 25.

More possible tour dates could happen across Europe. Apart from France and the UK, for Germany Munich and Berlin are mentioned. And more suggestions will pop up, that’s for sure. 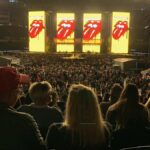 As you can see, we are facing the rising fever and excitement that comes with a new tour of The Rolling Stones, as we have enjoyed so often during the last fucking 60 years! It’s just ‘wonder-full’, fantastic and unbelievable to some extent, but still, it’s just happening once more.

I for one think, that this could really be the final tour of the band. They have never mentioned anything like a last tour or farewell tour and I don’t think, they will call it as that this time. Time will tell …