Nixon?? At first, I couldn’t believe it…

I got news sent in by William from remedypr.com with the subject “Nixon And The Rolling Stones Collab”. The name Nixon first irritated me, I must confess. It turns out, Nixon is a manufacturer of men’s and women’s watches. And now they have a line inspired by The Rolling Stones. There’s also one with The Greatful Dead among others…

My personal view on this: I like the Stones and the motivs Nixon used. As far as the design is concerned, it’s not really my very best vavourite cup of tea. Unlucky me, the watch I like best for it’s looks among these is the Primacy, hehehe …

CARLSBAD, Calif. – Nixon and The Rolling Stones are turning up the volume with a two-part, limited-edition capsule collection of timepieces, replacement watch bands, and other accessories. This collection, produced in partnership with Bravado, brings together the most famous logo in rock ‘n’ roll with a cultural forerunner in the watch and accessory space. The collection drops during the band’s 60th anniversary and will be released in two installments, with the first going live on August 30, 2022, and the second later in 2022.

The first release in the Nixon x The Rolling Stones collaboration spans watches across the high and low ends of the Nixon spectrum and also includes two replacement watch bands made from recycled materials. Whether you are a new fan of the band or a longtime groupie—you are going to love this two-part collection of timepieces and more from Nixon and The Rolling Stones. 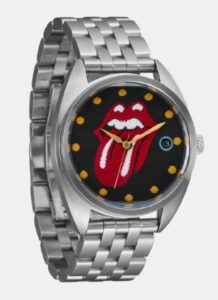 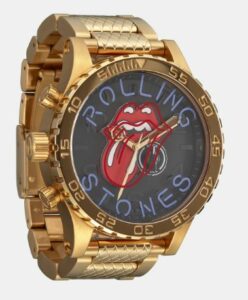 The Rolling Stones 51-30 ($550)
The oversized 51-30 plays it loud no matter what time it is. The neon sign font, classic Tongue logo, and a rock ‘n’ roll subdial harken back to the Stones’ early London club shows.
The crown and pushers are located on the 9 o’clock side of the case instead of 3 o’clock to prevent “wrist bite” during active use. Four-hand quartz with a rock ‘n’ roll subdial provides an analog countdown to when the show starts. Named after the face size (51mm) and water rating (30 ATM), the 51-30 is the OG oversized watch that birthed a whole style movement. Equal parts ultimate statement and waterman functionality capable of surviving any rugged scene. 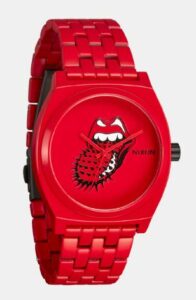 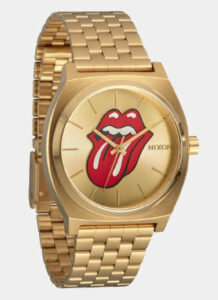 The Rolling Stones Time Teller ($175)
Available in two distinct treatments to celebrate the legacy of The Rolling Stones, this icon of Nixon heritage is always down to jam. The all-gold version of The Rolling Stones Time Teller plays heavy with the classic Tongue on an all-gold face with tonal gold indices and hands.
For those looking for something a bit brasher, the all-red version features the Spiked Tongue logo first made famous on t-shirts for the Voodoo Lounge tour. A classic silhouette with a modern spin, it is sized perfectly for any wrist and features a 10 ATM / 100m water rating so it can hold up to both stage dives or dives into a backyard pool. 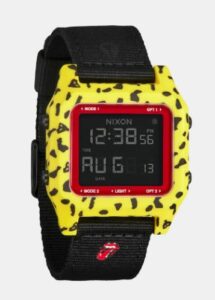 The Rolling Stones Staple ($175)
A rock-and-roll identity slams into modern consciousness for this standout digital. The bright yellow case artwork is inspired by the Voodoo Lounge album, offset by a black performance band that features Nixon and The Rolling Stones iconography. Constructed from Nixon’s Other People’s Plastic material made from ocean plastic, The Rolling Stones Staple blends rock aesthetic with new-age consciousness. Its razor-thin profile, customizable display, and performance-driven band make it easy to wear from the opening act through the encore. A digital coinflip feature helps the indecisive make tough decisions.

Replacement Bands ($40-$50)
Add some customized flair to your favorite timepiece. Two Rolling Stones 20mm Recycled NATO Bands ($40) are a part of this collection, incorporating The Rolling Stones’ signature or the Tattoo You album on one-piece straps that are quick-drying and durable. The 23mm FKM Rubber Band is soft to the touch, features quick-release spring bars for easy changing and stands out with a pattern inspired by the Voodoo Lounge album’s artwork.

Nixon’s collaboration with The Rolling Stones is its latest in a long history of partnerships with iconic musical talents. Previous collaborations with notables in the music industry have included Grateful Dead, Metallica, The Beastie Boys’ Mike D, Ozzie Osbourne, Pete Townshend, Tom Waits, and Ringo Starr.

The first installment of the Nixon x The Rolling Stones collection will be available online at https://www.nixon.com/pages/rolling-stones and select Nixon retailers worldwide beginning August 30, 2022.

ABOUT BRAVADO:
Bravado is the leading global provider of consumer, lifestyle and branding services to recording artists and entertainment brands around the world. Part of Universal Music Group, the leader in music-based entertainment, Bravado represents artists in more than 40 countries and provides services including sales, licensing, branding, marketing and e-commerce. Their extensive global distribution network gives artists and brands the opportunity to create deeper connections with their fans through apparel, consumer packaged goods and unique experiences.

About Nixon
Founded in 1998 in Encinitas, California, Nixon is a California-based watch and accessories brand. Nixon’s team-designed, custom-built products are sold in the best boardsport, fashion, and specialty retailers in over 90 countries around the world. For more information, visit Nixon.com.