=> Gosh, does he look good! Unbelievable! Yesterday, Mick has tweeted greetings to Canadian fans, sitting at a keyboard in the ‘Vocal Warm Up’-Departement and wearing a Canadien Stones-tee: Canada – getting ready for Burls Creek ! Hope to see you all there on June 29 – have a look at it on Twitter

=> Ok, while waiting for the rehearsals for the tour to start probably with beginning of next month, I came along this Charlie interview (Matt Lauer) from 1993, when the band was awed for by the fact of 30 years of still beeing alive and playing.

Now, generally, when Charlie gets interviewed, it’s usually gonna get short and kinda funny. This time around, though, … no. Charlie is talkative and also says something about his then new record, “The Charlie Watts Quintet – WARM & TENDER”…

=> The fan pre-sale for the Rolling Stones Mercedes-Benz Superdome show in New Orleans on July 14th starts today, Wednesday 29th May at 10am local time!

Use this code (all capitals, that is): JACKFLASH at this link: ticketmaster.com

On Instagram, he greets us, tipping hid hat and saying:

“Hey hi everybody! Happy to say that we’re back on the road again. I’m looking forward to seeing you all there…“.

=> Pollstar magazine has some questions for John Meglen (Concerts West) on the interesting subject of rescheduling a Stones tour!

Read it all at pollstar.com. At the end it is asked:

How do they sound now?
Answer: It blows me away how incredibly they are playing today. I don’t know if that’s just growing up and getting a little better with age, or whatever it is. But man, it’s just like you sit there and watch them and you go, ‘Man, they are just so on.’ And by the way, there’s nothing enhanced up there. It’s all them.

=> Stones give back credits of ‘Bitter Sweet Symphony‘ to The Verve’s Richard Ashcroft!

Richard spoke out at the Ivor Novello Awards, which recognize British and Irish songwriters. He said:

“As of last month, Mick Jagger and Keith Richards signed over all their publishing for Bittersweet Symphony, which was a truly kind and magnanimous thing for them to do … I never had a personal beef with the Stones. They’ve always been the greatest rock & roll band in the world.”

Let’s not forget, that all of the legal hassle was based on a Allen B. Klein lawsuit shortly after its release, which forced him to hand over 100 percent of the royalties from “Bitter Sweet Symphony” to Mick Jagger and Keith Richards. ABKO must be credited for this.

=> “Rolling Stones back in the studio working on new album” – That’s what you can read at msn.com:

Mick and the others are “pressing on with work on their first record of new material since 2005’s ‘A Bigger Bang’, which they started work on last year” and Mick is said to be “keen to make up for lost time“.

There’s no release date yet, but “they are keen to get it out as soon as possible“! Woah! That sounds really great! OK, MSN.com quotes these lines from the english tabloid DailyStar – I looked for that article there but actually couldn’t find it… just sayn’ 🙂

=> GET YOUR ROCKS OFF & YOUR TICKETS AT RS.COM! Further info from RS.com:

Tickets sold for the original dates will be honoured – fans do not need to exchange their tickets. Those who cannot attend the re-scheduled date can refund their tickets by accessing their Ticketmaster account. For transferred tickets, the refund will go to the fan who originally bought the tickets, once they have been transferred back. 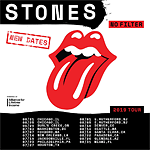 => Radiostation Rock95 in Barrie/CAN will make a huge announcement at 7 AM ! Well, Barrie is near Toronto and that means it’s about 6 AM over there now. So in about 1 hour we will know more it that announcement relates to the Stones’ tourdates or anything else … [thx irix, iorr]

*Tickets for New Orleans will go on general sale Friday May 31, at 10am (local time).
The pre-sale for the Rolling Stones mailing list will run from 10am on Wednesday May 29 to 10pm on Thursday May 30 (local time).

=> Some rumoured (!) dates: tour start in Chicago June 21 and 25, Ontario (CAN) June 29, New Orleans July 14 and Miami, August 31. Remember, these ar NOT OFFICIAL! These dates are likely or possible to happen or would fit into a viable tour schedule, nothing more. Let’s see, what happens.

A Chicago based radio station (93XRT radio) apparently has said that the Chicago dates (June 21 + 25) will be the tour start and that more details come tomorrow… well, it’s tomorrow again, folks, hehehe, but that’s alright.

=> rollingstones.com is online again, nothing new so far, though. But there will be news about the tour soon, that’s for sure.

=> YESSS! Mick just published a short sequence of him practicing and dancing! Well that looks VERY promising. What a guy! Unbelievable. Nevertheless, please take care, Mick! See him prancing at Twitter and Instagram

=> The Stones’ website is down since some time! So maybe they prepare the site for the new tourdates? Usually, if something like this happens, I would think, they relaunch because of new data, i.e. dates for the tour, but this seems different. IP is 18.222.72.20, but by now, it’s just offline.

=> Ok, so now yesterday was lacking any official announcement. And up to now, we have no clues as to exactly when that announcement is coming. It will, though. Probably tomorrow. Or later! 😉 But it will come and: the longer we wait, the sooner it will come!

May 14 – Announcement today? – No official news so far … / Yup, rumours around

=> 14:00 AM PST, 17:00 EST, 23:00 here at my home … OK, folks, to be honest, I by now doubt there will be some official announcement today. There will be one, that’s for sure, but not today, it sems. So, we have little more else to do than to look forward to tomorrow or Thursday. It’s unusually quiet compared to former announcements – everytime something leaked beforehand – this time, though, it seems like all is locked away and cept under the carpet – no leaks … let’s see what happens at 12 PST. I KNOW YOU FOLKS ARE WAITING AND SO AM I, HEHEHE … so far, no official news hav surfaced, yet. But the day in US/Canada has only just begun, so …

=> Over the past hours, there are 40 – 50 folks of you here at once checking for some news. I apprechiate that very much and I salute you: Hail, Hail, Rock’n’Roll! It goes without saying, that any news will be on display here ASAP! The Stones on tour again: what a band!

=> MAYBE, we will get some official information today, MAYBE. It might as well take some more days. We have to wait & see a little more, but only a little, I guess! :-). So far, there’s nothing really reliable concerning the new tourdates. But they will be there, no doubt…