I just got a mail with an interesting subject and I thought, you would like to send in your comment?

The mail comes from Teri and was allowed to be published here. So here is what it’s about:

I understand they are trying to reschedule, however, some of us could really use the money right now that is tied up in tickets.

I would probably buy new tickets when rescheduled, but for now, they have to understand people needs.

*As we all know about common sense and netiquette, all comments will be monitored by me, before they are published here.

I came across 2 nice finds on the net I really enjoyed.

It’s likely that you know about these already, but in this case, nothing is lost. On the other hand, probably you’ll have as much fun with it as me.

So here we go:

This time, folks, I get the guitar right!

The Keith-Tweet tells us, that he played a 1957 Gibson Super 400 during that same session he posted the other picture before. 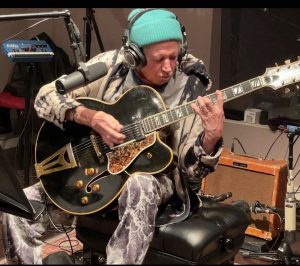 If interested in the sound of this masterpiece-instrument, have a taste here, altough it’s a 1956 CES:

If intereseted in the history of this ‘top of the line’ Gibson guitar, looka here:

As I wrote the last post – Keith playing to new music – I made a mistake.

I’m always interested in the gear musicians play – of course the Stones’ gear is also on my list of interesting details concerning this band. So I immediately tried to figure out, what kind of bass Keith plays in his last tweet. (Not exactly ‘his’ twet, but the tweet his folks posted for him).

And as you can see in the tweet and my post, at the headstock I thought it says “HOHNER” – but that’s not correct.

As Dietmar Haslinger kindly pointed out to me, in fact it’s a HOFNER bass. in Keith’s picture, it looks like a real aged vintage one. At their website, you can see the modern replica of that instrument. So thanks, Dietmar, for the mail!

Actually, Dietmar also sent in two pictures and one book-cover with quite some relevant Stones content: First is Keith, as he was playing Paris in 2017, the second is Dietmar together with Dominique Tarlé at one of Tarlé’s vernissages. (Pictures © by Renate Haslinger).

Then, he also has written a novel entitled “Brunello, Sex & Rock n Roll”, brunello beeing his favourite italian red whine… if interested in the book, send me a note!

As Keith tweets this nice picture of him playing a HÖFNER bass in the studio (most likely adding notes or overdubbing  some tracks), we can see that the stones music is still alive and just waiting to get out of the lockdown.

And this is my expectation for the next months to come: As soon as the vaccines successully give us some protection, there will be a long line of artists waiting eagery to go on tour again. And that should correspon to all levels of culture, not onl music.

So if we think postitive and look towads this years autumn months, there is a chance to see some or a lot of the big names in the business on tour again. And I definitely count the Stones to be among this list. However, not all cantour at once at the same place – that would not make sense. So I recon that all those business managers and logistic experts will have a whole lot of sleepless nights in order to get those schedules right. And The Rolling Stones will play an important role in there, I’m sure!

So let’s all hope we will get past this pandemic and get back to some kind of normal live soon, including some live music of the greatest living Rock’n’Roll band of this planet!!

About last night! New music on the horizon! pic.twitter.com/6XsOL6rknk 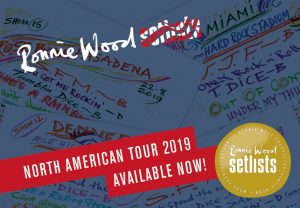 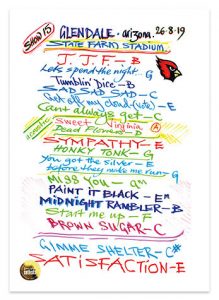