With a setlist once again altered by songs like Sad Sad Sad, Get Off Of My Cloud and Beast Of Burden, this is another nice variant of the setlist played so far.

This show was another good one. But still, not as good as LA II, as far as I can tell. And exactly this is the problem:  judging a show like Tampa solely from the live streams available at the time and given their VERY limited quality, it’s very hard to judge anything even remotely just. You only can get a very small taste of the actual event. But then, there’s a tiny, little advantage: If you’re at the gig, the sheer volume keeps many details under cover. The live streams or YouTube videos, however are different. The algorithms of mobiles or cameras level the volume down and you get a completely different sound experience.

Thus, the experience of being there and watching via the internet from afar differes greatly. Nevertheless, I have come to great respect for Mick, Keith and Ronnie for delivering as they did so far on this tour.

As for Tampa, “Ghost Town” via the stream last night was not really convincing. But check out the YouTube video below – I had tears in my eyes and find they delivered that song mighty fine. Another highlight, if you want, is “Sad Sad Sad”.  The first time added to the setlist for the first time on this tour, this was a nice addition. And the song delivered well until it was Kaith’s time to do the solo. He completely missed the right scale. In the video below, you can see Mick looking back as he walks along the catwalk to engage the audience, thinking ‘What’s going on here?’. The video, taken from the pit perspective, has the sound of the stage monitors for the most part, and less that from the PA. So what really puzzles me here is that Keith kept on playing the wrong notes as if he couldn’t hear his guitar from the stage monitors. But thast’s not really the case, right? Not with a production of that scale and quality they have running now. And, too, Keith is not deaf. So that would be a question I really would like to have answered. I bet, Mick and Keith will discuss those moments with the production team running this tour, as they will have done with this fabulous incident with the missing 10string acoustic guitar for Wild Horses before…

tampabay.com – In Tampa, the Rolling Stones have got what you need

photos.cltampa.com –  The Rolling Stones revisit their favorite local memories in brawny, assertive return to Tampa Bay“[…] Still, it’s unfathomable that a group made up of core members who have been at it for the better part of 60 years can still pack in fans at a football stadium. The Rolling Stones can still attract an audience that ranges from 20-somethings to great grandparents who know it’s only rock and roll…but they all seem to still like it. “

While waiting: why not listen to a very recent Keith interview: Strombo (apple music) with Keith Richards 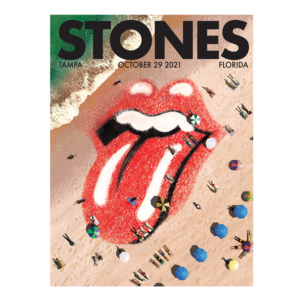 Here’s some from the local press:

The 8th show of this tour is coming near.

As for the song vote, this time it is really special:

Get voting for the song you want the Stones to play at Raymond James Stadium in Tampa this Friday at https://t.co/0RofIqlPt3

There’s been a wild discussion during the last weeks about that song by The Rolling Stones.

Usually, I skip gossip, slander or fake news. I like to have the proofable facts instead, even if that’s not such a great story. When this subject came up, I superficially took knowledge, without paying too much attention. But then again, it’s about this band I love and meanwhile I think, it’s about time to write something about it.

Let’s take this tabloid, the english Daily Mail, for example. This paper states: “Rolling Stones fans fight back against woke cancellation of Brown Sugar by bombarding the band with requests to play the song at their concerts in ‘fan favourite’ vote” and

And here’s the lyrics we are talking about:

Brown Sugar, how come you taste so good?
Brown Sugar, just like a young girl should, oh no

Drums beatin’ cold, English blood runs hot
Lady of the house wonderin’ when it’s gonna stop
House boy knows that he’s doin’ all right
You should have heard him, just around midnight

Now, I bet your mama was a tent show queen
And all her boyfriends were sweet 16
I’m no school boy but I know what I like
You should have heard them, just around midnight

Brown Sugar, how come you taste so good? Oh, no no
Brown Sugar, just like a young girl should

I can tell you, that when I danced to that song in the early 70ies – in Germany that is – I had NO idea what that was all about. Lines like “Hear him whip the women, just around midnight” only translated to me much later – I was in my early teens then. Looking back on it from now, I really wonder, how the BBC could have ever played that song in 1971 and the following years without getting sued… 😉 But they did, dind’t they?

If find these lyrics quite ok. They target at the crime of slavery and sympathizes with the black people under this horrible rule back then. And to some extent, they still do, I’m afraid. Racial segregation like in the US even after WWII is a thing VERY strange to me. So, in my view, it’s a very social-critical and political song. But then,  the times in the early 70ies were exactly that: very politial and revolutionary trying. But this was for a good reason, and no way just accidential.

So, in a nutshell, that is what I think about it. The Stones should add the song again to their setlist: that would be ok for me. No problem.

For once, it was difficult to get a stream after Miss You and then every stream has different optics and sound-quality. Nevertheless, I wouldn’t want to have missed it. Hopefully, I won’t miss any show, this band plays until the very stop.

There are some reviews by the press, recommended to read. They have different approaches and opinions to the show yesterday. In case you were there: why not share some words with us here? 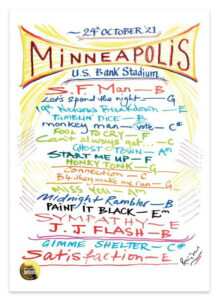 “Next year marks the Rolling Stones’ 60th anniversary together and after Sunday’s show, it sure seems like Jagger and Richards are going to keep this band rolling for the foreseeable future.“

“In the end, it felt like just another good concert by a legendary band, rather than a show that added to the legend.”

“[ …] Then again, the Glimmer Twins delivered yet another ageless performance Sunday night, the type that puts bands a third their age to shame. […] Next year marks the Rolling Stones’ 60th anniversary together and after Sunday’s show, it sure seems like Jagger and Richards are going to keep this band rolling for the foreseeable future.“

Watch the complete show in 1 go!

Showtime for Mineapolis! Waiting for the Stones … 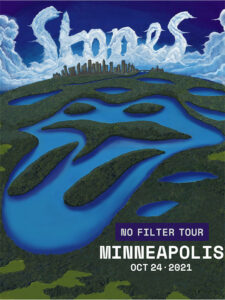 OK, due to missing streams in the middle of the set, we don’t get to enjoy the show as we had done before on this tour. After YCAGWYW, most feeds were gone. Nevertheless, we’ll get the show later on YouTube.

YouTube – “Live” (?) – from Start Me Up until Miss You, using the feeds available until then.

Yeeey, and it’s another Stones show we can witness!

The local newspaper, The Minnesota Star Tribune has some Stones content these days:

If you want to vote for the vote-song, you can now do so! You can choose from among these songs:

You can consider the 2022 European Tour a done deal.

Ergo: go and make your EU travel-, holiday- or Rock’n’Roll plans for next year, folks!

Just 60 years and 4 days ago, Mick and Keith met each other again at that platform #2 in Dartford railway station. Keith on his way to art school, Mick on his way to the London School of Economics…

During the LA #2 show, Mick related to this story while everyone backstage went crazy in search of Keith’s 12string for Wild Horses, hehehe …

Nowadays, you can find a blue plaque in honor of this event in rock history at Dratford Station:

More on this at waymarking.com, and the BBC from 2015 has an article about this, as well as planetradio.co.uk and NME.com.

Meanwhile, we have some news from the band and some nice pictures of Mick in LA…

Tattoo You 2021 out tomorrow featuring 9 new unheard tracks from the vaults: https://t.co/DjBFbfipyY 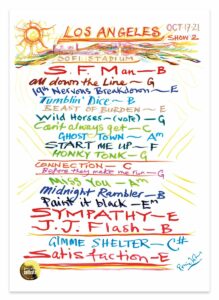