The Stones have informed us about the upcoming fan-pre-sale:

The fan pre-sale for the Rolling Stones shows in New Orleans, Los Angeles and Las Vegas as part of their No Filter 2021 tour commences tomorrow, Wednesday July 28, at 12pm (local time), through to Thursday July 29, at 10pm (local time).

The link to access the pre-sale and your code is below:

Be sure to just input the above code in capitals. Please note the pre-sale will not open until 12pm local time tomorrow for each date – you will not be able to purchase tickets until then.

Should you have any issues when trying to buy tickets please reach out directly to Ticketmaster here.

You can also find alternative ways to contact Ticketmaster, via phone and TDD here.

Tickets go on general sale on Friday July 30, at 10am (local time).

With his looks and moves, you never think he’s 78 today. It’s just a wonder. By now, he’s preparing for the tour and as Ronnie has said, he’s fit. Fighting fit, to be precise. You know what? I’m left speechless. Mick, enjoy your birthday and every day and every tour, that’s to come! We love you!!!

Thanks so much for all your birthday wishes ❤️ pic.twitter.com/sNqYKddAqB

Wishing the one and only @MickJagger a very happy birthday today! 🎉🎤🎉 pic.twitter.com/5jwlc2hml7

WHAT A BAND!! The Stones will tour the US this year!

I’m so proud to be a fan of this band! Tour dates are there, tickets are on sale. This is Stones heaven, folks!

Until the 2nd tour-start of the Rolling Stones 2020 US tour, please feel free to enjoy the “Sticky Fingers” club gig at the Fonda Theatre, 2015. German TV station ARTE is streaming this beautiful concert free. Go to ARTE.TV and enjoy.

Or, if you want to save that CO2 produced by streaming, check for your BlueRays, DVDs or MP4s and watch it from there. 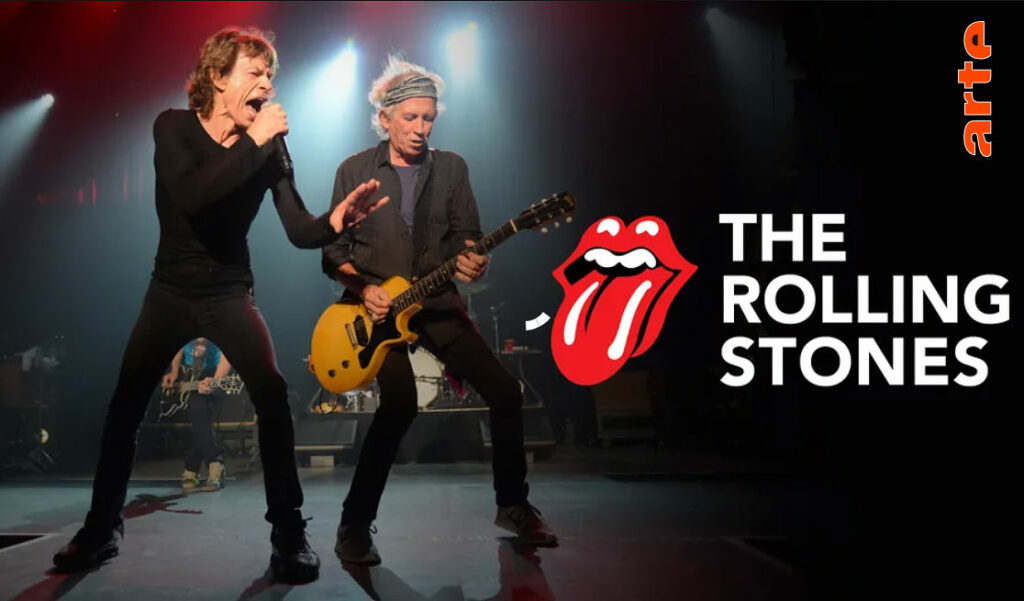 The Rolling Stones will go on tour in the US this fall!

Here’s the words we all have been waiting and hoped for for so long:

“We are thrilled to be able to announce the rescheduled dates for the Rolling Stones 2020 US tour, which will now go ahead this fall!

We want to thank you all for your patience during this very difficult and unprecedented time.

All previously purchased tickets will be honoured at the rescheduled dates, unfortunately, there are a few dates that we were unable to reschedule – Ticketmaster will communicate directly with all purchasers of these tickets with more information. Where feasible, a priority offer for ticketholders will be available for nearby shows. 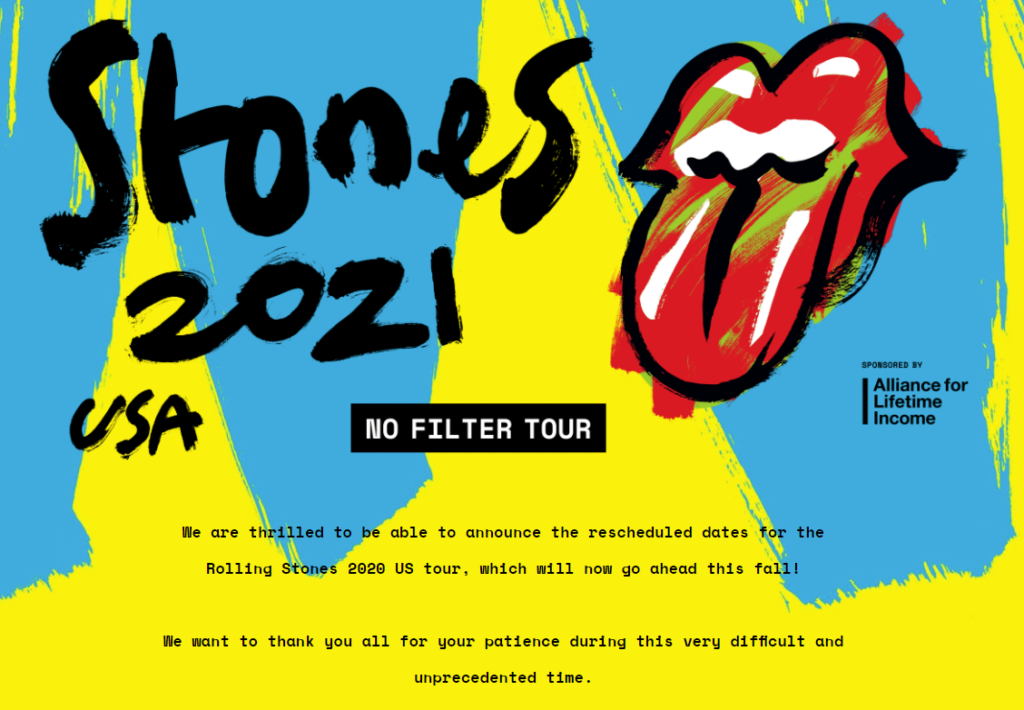 Mick: “I’m so excited to get back on the stage again and want to thank everyone for their patience. See you soon!”
Keith: “We’re back on the road! See you there!”

July 21 (2) – Update: apparently, Darryl was scheduled for a gig on August 15, but that seems to have been cancelled, because he’s booked for the Stones on August 14… whether that’s for a gig or studio work or even rehearsals (yikes!!) is still unknown …

July 21 (1) – Rumors (!) tell, that this week might see an official announcement. They might tell us about rescheduled dates or as well will announce that because of delta Covid they can’t resume to tour this year. Sigh! So we have to sit and wait for any relyable news, that comes across.

Let’s hope we get some tourdates this year!!!

We all look forward to THE POSTPONED NO FILTER TOUR of The Rolling Stones! So again, we have to wait for the rescheduled official dates…  /-)

Good news from Ronnie and for Tattoo You

Ronnie has given The Times an interview, which has some interesting and positive news for us.

First, and most important, Ronnie has said that he has been given an “All-clear” in March from his doctor for his treatment of small cell cancer and, just after his last check-up, states: “I’m well. I’m strong. And I’m adaptable […] But it has taken a lot of fighting, a lot of stamina to get through it“. So basically, after hitting it hard with chemo therapy, he has yet another battle won. If he gets some more rest, he hopefully will be fine for playing live again. Nevertheless, he has to check again every three months for cancer; that particular strain is quite some nasty desease.

Second, speaking of the 40th anniversary of Tattoo You, he “and Mick have done nine new tracks for the re-release of Tattoo You. And me, Rod and Kenney have been recording some new Faces music.” Mick, he says, is “fighting fit”. So the upcoming re-release of that album will come with quite some add-ons, including several new tracks. Americansongwriter.com also reports this.

Interestingly, he doesn’t say any clear word about tourdates. It’s mentioned, however, that “The Rolling Stones still hope to resume their No Filter tour“. It’s all in the hands of Covid, us, and the vaccines and whether the band can take the risk of touring which is rising again these days, as you all may know. In the end, it should make sense for the band and all us fans.

Finally we have some news about the new album and tour!

Until today, the Stones have remained silent, officially, as far as this year’s tour or the new album have been concerned. I already thought, because of the new delta variant of Covid, they would cancel everything and remain passive, waiting for more secure times.

I might be prooven wrong. That’s at least what I’m hoping for. And here’s the reason:

According to the DAILY MAIL (that’s not the official Stones news ressource, but what the heck …), Mick has been in London, at Wembley stadium, to be precise, in order to catch the soccer game of England vs. Denmark. And now finally, the rule, that England looses every time Mick is present, has been prooven wrong.

So, Mick flew in from France, ignoring the quarantine for 10 days he would have had to oblige as France is on UK’s amber list. Thus, ha has broken UK’s Covid rules and could face a fine of £10.000 as a result. Well, no worries here, he most likely can afford this, hehehe …

In that article of the DAILY MAIL, we find some very interesting lines:

“The Rolling Stones are currently finishing off their latest album in London, which is set to be released later this year. Mick is working on material with band-mates Ronnie Wood, 74, and Charlie Watts, 80, in the UK, while Keith Richards, 77, contributes from his home in the US.“

“They are also planning to release another album of remastered ‘basement tracks‘ never previously released from around the time of their Tattoo You 1981 release. The band’s sold out tour of America is currently waiting to be rescheduled after Covid-19 forced the 15 dates to be postponed.“

After about a month of waiting for any official announcement almost every day, this finally gives us a first impression of what’s still ahead. The Stones management still has to find ways to find the best solution for and with the band, the fans, the promoters and the ensurance – not a job I would be very happy to have to do…

Anyways: let’s look forward to good news coming soon, hopefully! And here’s the article of the DAILY MAIL – have a look and read for yourself!

Ronnie and Sally met the 2021 WELLCHILD Award Winners as well as the Duke of Sussex at the Centre of botanical science & research, Royal Botanic Gardens, Kew.

Here are some nice pics he posted via Twitter from the meeting. We can see, that his hair is growing longer and his physics are not so frail anymore, although he’s really thin. But he was almost like that already before. Nevertheless, let’s wholeheartedly wish him a strong, swift and fast recovery!

Ronnie also posted a pic wearing an England Stones shirt from the shop in Carnaby Street due to the running European Soccer Championship on June 22. Have a look:

And here’s Keith, posted just hours ago today, honoring James Cotton’s birthday with a clip from 2012: