Christopher was kind enough to share with us his experience of one gig, the Stones played at Wells Fargo Center, Philadelphia.

He believes it could have been in 2006, but to my knowledge, the Well Fargo Center was played in 2013, June 18 and 21. You can see the setlists at setlist.fm or here at stonesnews.com (well, it’s a l-o-n-g page, see fot the first third when scrolling or search there for “Philadelphia #2” and “Philly gets stoned!”)

So here is what Christopher tells us about that night and the Stones. Were you there, too? Was it in 2013 or some other year? So, just comment, if you like!

I believe it was ‘06 at the Wells Fargo Center in Philly. The band was alternating Satisfaction and It’s Only Rock N Roll at the end of the show. It was feeling like an IORR night so of course we had our whole section in the cheap seats calling for it and we were up there but close to the stage. Close enough that we could most definitely be heard. Keith was feeling our section all night, feeding off our energy and letting us know in his way we’re appreciated.

As the night came to a close it was either IORR or Satisfaction left to play I believe as the last song of a 2 song encore. Our section must have been infectious because now more sections were screaming with us It’s Only Rock N Roll. Keith slides around the stage to our section and rips the opening riffs of IORR as we go crazy to hear it and that Keith is letting us know he’s with us, the rest of the band doesn’t stray from the replanned setlist and plays Satisfaction, totally hanging Keith and us out to dry.

Keith actually pointed to the setlist next to Charlie then to his head as almost to say my bad but we all knew what he meant. Having talked to people also at the show seated on the other side of the arena the next day the story was Keith was so wasted he played the wrong. Glad I wasn’t in their section. Keith always says he plays for the guy in the furthest away seat and he does. No matter where we’re at Keith also finds us and subtlety let’s you know he knows you there.

That connection with the audience is the absolute coolest part of the Stones, well Keith! Being on the level he’s on he’s like seeing a friend at the local bar tour after tour year after year. About 90% of an audience shows up to see a Rolling Stones concert but I’m never surprised to find that 10% of us that come to sing, dance, laugh, and party with Keith.

The next show a few days later in NY at MSG was probably the best IORR I’ve ever seen live.

Here are some pics from the Philly shows:

Hi there, folks! Before the Stones announce, how and when the rescheduled tour is going to happen, we are in for a nice treat!

Alex Tsalikhin sent in a numer of pictures, which he took during the shows in New Jersey and Buffalo in 2012, 2015, 2016 and 2019. I think, these were done with a Canon PowerShot SX30 IS. When seeing these pics and web-optimizing them in order to be shown here, it was easy to remember the vibe and exitement we all have experienced during these shows. And I can’t wait for them to go on one more tour!

So please enjoy, and many thanks to our friend Alex!

You know, I’m into books about the Rolling Stones. Now a new one comes along and I just couldn’t resist…

The book’s called “La Villa – The Rolling Stones 1971” and is by Dominique Tarlé. Well, I think, you know this name and his story…

I own about 5 meters of Stones books and magazines. I have to admit, that so far I couldn’t afford to buy book-treasures such as Blinds&Shutters (Genesis) etc., but this time, I wanted to get this edition into my collection. Compared to other really expensive books about the Stones, this comes in at just 135.- Euro (about $164.-), which is not that expensive if you consider the costs of that production, the special paper choosen for bringing the photos across with enough brilliance to cope with Dominique’s originals.

And even if this still is a lot of bread for me (shipping to Germany was another 25.- €; if you order it from the US, it will be a little bit more, I guess.), this time, I felt that everything fell into place and was reasonable. So no question: this is an opportunity and I just happily decided to order it.

Anyways, what convinced me was that I could afford it and that I simply love Dominique, his pictures and the times of 1971 in the Stones history.

So shorty after I can hold it in my hands and have gone through it, I’ll give you a review, and that’s a promise!
🙂

The book is sold by an art gallery, “Galerie de l’Instant” in France. Check out their exhibition of Tarlé’s Villa and have a look at the book!

Here are the details: 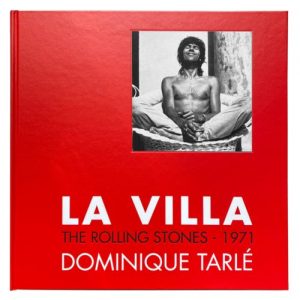 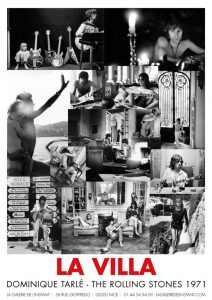 Taken from La Galerie de l’Instant’s site, some info about Dominique and the villa:

50 years ago, the biggest rock band in the world, the Rolling Stones, landed in the south of France. Following various tax woes in England, Mick Jagger, Keith Richards, Charlie Watts, Bill Wyman and Mick Taylor decided to come and seek shelter in France. The young photographer Dominique Tarlé who had known the band for a few years in London and on tour, came to join his favourite musicians in order to immortalise them in this new environment…

He began with the now-famous Villa Nellcote, rented by Keith Richards, overlooking Villefranchesur- mer harbour… He came to spend the day with the guitarist and his family, and will only leave 6 months later, following Keith’s invitation to enjoy this special moment in their lives. How do you refuse such an offer, when you are a fan of photography and rhythm and blues?

Dominique Tarlé then became the only photographer ever to live with this legendary band, at the height of their career, during the creation of the no less legendary album Exile on Main Street, going in the same day from the simplest daily events to the pure musical moments between professionals. This unforgettable summer would forever leave its mark on the photographer’s life and the history of rock’n’roll; the trust the band gave Dominique Tarlé still holds even today and is testimony to the sincere friendship that bound him to these artists..

As more bands announce their tours for this and next year, a similar announcement by The Rolling Stones appears to be more and more likely!

First rumours in the press have surfaced. Ok, it’s an austrian tabloid, OE24.AT, and as such, it’s far from being a reliable source, but nevertheless, the headline reads rather promising and sums up what seems to be the most likely scenario concerning the future plans of the band and it’s organizers:

(Live. Autumn 2021: [Tour in the] US and Canada. Summer 2022: big tour of europe to celebrate the 60th band-anniversary. These are the secret tour-plans of the Rolling Stones. Unless Corona stops them [from touring] again. 15 US tour-dates for 900.000 fans were cancelled [re-scheduled] last year, if you recall.) 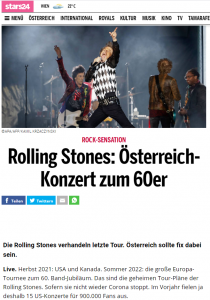 This is Ronnie’s new album: MR LUCK – A TRIBUTE TO JIMMY REED

The Ronnie Wood Band return to the blues and announce the second instalment of his live album trilogy, ‘Mr. Luck – A Tribute to Jimmy Reed: Live at the Royal Albert Hall’, set for release via BMG on 3rd  September 2021. Ronnie will also share tracks ‘Good Lover’ and ‘Baby What You Want Me To Do’, the first taste of what’s to come.

The album was recorded live at a memorable night at the Royal Albert Hall on 1st November 2013, and features stunning tracks including ‘Good Lover’ and ‘Ghost of A Man’. With unique album artwork specially created by Ronnie, ‘Mr. Luck’ will be available digitally, on CD, as a standard black vinyl release, and as a beautiful limited edition dual-tone ‘smoky blues’ vinyl.

And here’s Mr. Luck himself, still recovering from his chemo therapy. All best wishes for a strong recover, Mr. Wood!!

My new album Mr. Luck – A Tribute to Jimmy Reed: Live at the Royal Albert Hall, will be out on the 3rd September 2021, and available to pre-order from tomorrow morning!
You can also listen to two taster tracks from midnight tonight:https://t.co/5tU7vaHTLh pic.twitter.com/WNA4BpQgZS 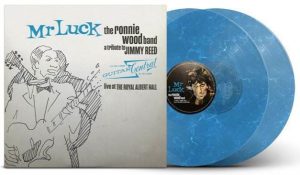 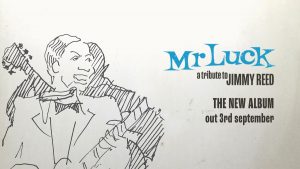 It is a no-risc-bet that US tourdates are going to be announced!

As a matter of fact, a Stones tour can only be planned and organized on a very high level. We all know that. That makes it more difficult for a tour to become reality. More equipement, more people envolved, more security, more merch, tricky business and ensurance calculations and, of course, more profit for all involved have to be settled.

That’s the reason, I believe, why we havn’t already heard some official announcement from the band about how and when the rescheduled dates will take place. We only have our hopes and rumors. The No Filter Tour 2020 was cancelled in March 2020. Until then, if we remember, on February 6 2020, we had these dates planned :

By now, The Eagles, for example, have announced new dates for August and September this year – among them the MSG! Genesis, too, have tickets out for their tour in November/December in the US and Canada, as well as for the UK and Ireland in September/October!

Could it be possible that the Stones will refuse to join in? Nnaaawww… 😉

Are The Rolling Stones planing for another tour?

What kind of tour would it be and where will the gigs happen?

Most likely, and this is also supported by rumours, is, that the band will first try to get the rescheduled 2020 tour dates done. This would most likely point to a tour of the US and Canada, maybe this fall. Of course, this can only happen, if the conditions of the pandemic allow such an undertaking.

Next up would be the 60 anniversary tour, most probably starting in Europe and, again, in dependance upon the pandemic situation then.

As the rumours begin to boil more and more during the last days, I feel the tension rising and I hope we can get to some more reliable informations soon. It all comes down to two conditions in order to let this happen:

Me, I don’t have the slightest doubt about the first condition: tickets will sell FAST!!

So let’s hope, we can get the second condtion right.

Born June 2, 1941, he was finally convinced to join a wild bunch who named themselves The Rollin’ Stones in 1963. His unique style of playing has been (and still has!!) a defining characteristic of the sound of The Rolling Stones.

So our best wishes go out to the Whembley Whammer, the gentleman drummer and pounding heart of the Rolling Stones!
Happy, happy birthday, Charlie!

Some of his other works:

Here’s one of my most favourite Charlie videos; hope you enjoy!

And here you have him talking about his interest in music and drumming to Chad Smith from the Drum Channel.

And last, but not least, the hilarious interview he gave together with yesterday’s birthday boy, Ronnie Wood – enjoy!

Happy 80th birthday Charlie!! ❤🙏😎🥁
Back to back birthdays 🤣🥳🎂 pic.twitter.com/pC6RXMmNqi

All the very best wishes for the new kid in the band!

It’s only 46 years ago he joined the band. Before, he played with The Birds, The Creation, the Jeff Beck Group and The Faces. Thank you so much, dear Woody, for all this music. Not to forget The New Barbarians and his seven wonderful solo albums!

Stay well, Ronnie, we all desperately are looking forward to see you on stage again for the next Stones tour!!!

Join us in wishing the one and only @ronniewood a very happy birthday! Rock on Wood!! 🎉🎸🎉#happybirthdayronnie