This week went by so quick! Hyde Park II is coming up. And an official Bio of Charlie!

Tomorrow, the second show at Hyde Park will take place. The first show there was a blast already, so we look forward to another great evening!

Then, with the agreement of the band and the Watts family, we hear that the official biography on the life of Charlie Watts, “Charlie’s Good Tonight: The Authorised Biography of Charlie Watts” will be released on October 11. It was written by Paul Sexton, who followed and covered The Rolling Stones for over 30 years. 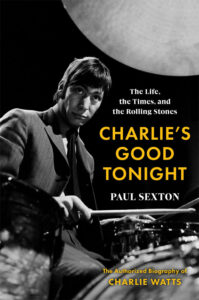 Here’s what Seraphina has to say about it:

“My father was an intensely humble and private person off the stage, who relished and protected his private time at home with us. [ … ] We were so very touched by the outpouring of love and support from all his fans when he died. We’re very happy and grateful that Paul, who interviewed my father many times over many years, and whom my father liked and respected, is the one writing this very special book about this very special man.”