What a hot show it was!

And although they only played 18 songs – they deserve our highest respect for running down that gig in the heat for 2 solid hours. They are unbelievable! More on this below.

But now, listen up, if you plan to see the Stones in Paris!

Charly contacted me and has 2 tickets for Saturday’s night:

I’m about to look for the coolest videos for yesterday’s show. This will take a while, although they played only 18 songs due to the fierce heat yesterday. So they left out Gimme Shelter – maybe they decided this just shortly before the show or before they usually play this song – let’s have a look at the videos for this.

They had planned to play it – that much is clear by looking at Ronnie’s setlist he painted before the show: 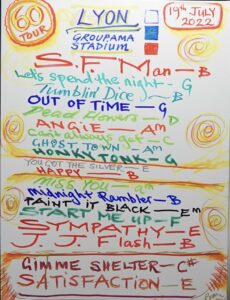 But, and that seems to be the usual case by now, that show, too was considered as very good. Especially Keith gets mentioned again for his good, clear  and engaged playing. Mick, as always, seems to come from another planet. Running the show für two solid hours, at 79 years and in this heat they had. This is truly awesome!

So let’s have a look… the show in videos

7. You Can’t Always Get What You Want

16 – Sympathy For The Devil