All we hear from folks at the gigs is praise and respect for the boys, especially Mick, for delivering such lively, powerful shows. As an example, Mark sent in these thoughts about Hyde Park II:

Some thoughts from the show:

It was amazing, the 7th time I have seen them and they haven’t lost a beat. Steve Jordan has given them a new lease of life whilst respecting Charlie Watts and his presence is felt at all times with a touching tribute to start the show.

I’m surprised more people are not talking about Jagger, he still moves like his 40, its incredible, do they put him in carbon freeze in between shows!

Keith and Ronnie were firing on all cylinders and seemed to have more oomph since the last UK shows.

The queues for the merchandise were longer than the beer queues!

Great to see some changes to the set list since Hyde Park show 1 the previous week. I hadn’t heard You Got Me Rocking for a while and Tumbling Dice is always welcome.

I loved Jagger’s welcome to the American Express Rolling Stones Covid super spreader event! Still controversial after all this time!

My friend said at the end if this is the end then they have gone out on a high.
I don’t think it is, as long as the almighty doesnt want them I think they will be back in a couple of years. Maybe promoting a new album, fingers crossed.

By now, the band has revived the song vote again. So go here and cast your vote for tomorrow night by choosing one of these: 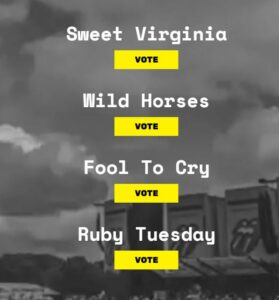 Vote for which song the Stones will add to the setlist for their Amsterdam show tomorrow night! Visit https://t.co/0RofIqlPt3 to have your say! pic.twitter.com/aqR5TBtZ58