This is the day before the show and the anticipation grows …

Until now, the Stones have given very well reviewed concerts during this tour – so why not expect the same for Vienna tomorrow?

Well, why not contribute to this and add your choice of the 4 songs you can vote for? 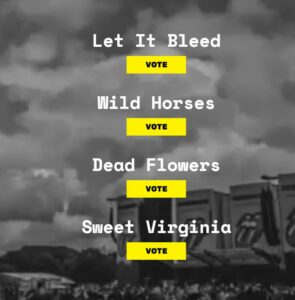 Whereas yesterday, Mick strolled around in the city and dined in a posh restaurant (see below), Keith and Ronnie seem to have kept a low profile.

But tomorrow, the band will leave the hotel early afternoon and head for the soundcheck at the Ernst Happel Stadium. Now, folks: is anybody of you at that place and time tomorrow to give us news about the songs they play during the soundcheck? That would be really cool!
So don’t hesitate to mail or comment!!

What did Mick do? oe24.at has the answer:

On Wednesday evening, Mick Jagger was the guest of star chef Konstantin Filippou. He escaped the waiting fans in front of the hotel through the side exit. Fans and paparazzi are already on the hunt for a snap of Mick Jagger – but it’s no easy feat. Because Jagger has strict rules despite corona recovery: no selfies, no autographs. He made an exception for star chef Konstantin Filippou, in whose posh restaurant the Stones frontman was a guest on Wednesday evening. However, the waiting fans in front of the Hotel Imperial were disappointed: Jagger escaped through a side exit of the hotel and drove into the restaurant in another car. He left his Mercedes S-Class in front of the Imperial.

Already 2 days ago, but maybe of interest:

Mick and Ronnie are in conversation with @w1lko tomorrow as part of the Stones 60th Anniversary celebrations! Catch it on @AppleMusic Hits - July 13 at 9am BST // 1am PT: https://t.co/15I8ITYP5v pic.twitter.com/fXamS1GGPT

The first part of the Rolling Stones in conversation with @w1lko is available to listen to on @AppleMusic now: https://t.co/15I8ITHdGV #StonesSIXTY pic.twitter.com/JV0ix4azkS