While we wait for the next gig, we can enjoy Mick being interviewed for the first time by Howard Stern

Let’s hope for a nice interview with real questions like “How is the new album?” and less dumb ones like “How does it feel to be Mick Jagger?”… 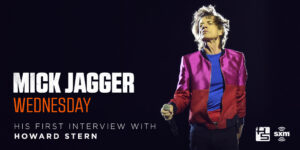 For those in Europe and other countries than the US, we’ll check for Howard’s YT channel for this interview or at least parts of it.