Wow – that was one hell of a show!

The Rolling Stones seem to be easily able to keep their high niveau. Since Madrid, the huge majority of reviews was better than positive. And that’s for a reason.

Well, maybe you noticed yesterday, that my planned streaming didn’t come to life. It was a on and off thing going on and I couldn’t get a better connection there. There were about 15 – 20 seconds of stream and then it broke down. Then it came back a little later, but broke down again after about the same amount of seconds. Interesting was, I find, that this pattern stayed  – the on and off parts came almost regularly which makes me a bit curious… But in the end, it just was a poor connetction there. So sorry for this, folks! But at least, I tried!

So if you plan to go to one of the two remaining shows – please consider to try to stream for all those who couldn’t make it to the show, would you? 😉 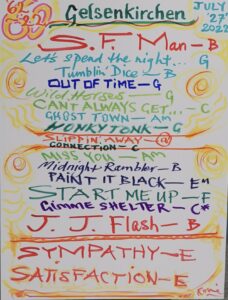 As for the show itself: I just enjoyed the band and advanced level of intensity, which came across quite naturally. The weaving was there, Mick is just a two-legged wonder and the guitars were loud, mean and dangerous. Just like they should.

I was back at home at 2 AM, slept a little bit and went straight tio the office for work. I’m a bit tired now, hehehe …

But anyways, here’s the setlist, some pics and the videos …

The complete show in 1 go:

17 – Sympathy For The Devil