Check this out: Keith is interviewed in the Rolling Stone Music Now podcast. Running time – 29:58

Keith Richards tells host Brian Hiatt about the future of the Rolling Stones without Charlie Watts, making his 1992 solo classic ‘Main Offender,’ his reaction to Paul McCartney calling the Stones a “blues cover band” and much more

Need a ticket for Liverpool?

Well, Peter mailed me that he has one to spare. If you want it, sent in a mail or comment below and I’ll give you his e-mail-address, so you can contact him!

BTW: here is newsanyway.com with “The Stones are rolling into Liverpool“

Hey hey. My name is Mitchell. 27 year old fan living in New York. Seen the boys 11 times so far and got tickets to see them in Paris!

My question: which pit is keiths pit for the Paris show?? I purchased pit A during the presale and it said that pit B is Ronnie’s side. However when I looked on stubhub to get resale tickets for my friend it shows pit b to be Keith’s side. I’m a keith guy so I’m fearing I purchased the wrong tickets . I don’t speak french which doesn’t help. If you could clarify I’d appreciate it!

— That was cleared soon. I then asked him about the photo he had sent in with his question: 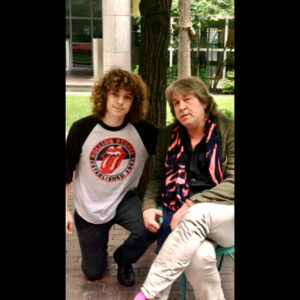 The photo was taken the day after their second Philly show in 2013 in Philadelphia. I was 18 and Mick was kind enough to chat for a moment and take a photo. I then went inside and sat on a piano and played some blues. He came in a few min later and told me it sounded good. Also saw the entire band exit the four seasons in Philly before the show. Mick and Keith walking and talking side by side. I got keiths attention and did his head, heart balls salute to him and he laughed and gave me a thumbs up. Beyond cool.

— Next, I asked about the what and where —

I went inside the four seasons Philadelphia where I played on a piano that was sitting in the lobby. He was still outside and eventually came in and walked passed the piano as I played some blues in g (I remember the key haha) and he said it sounded good. At some point my mom saw mick and asked if he thought I could play which he said yes lol. Then she asked him if he thought I should play piano or drums as I also play. He said I’ll make more money as a piano player lol. He was very kind to me as a young adult and it meant a lot. Come to think of it I met Bobby Keys at the hotel and he was also a very kind man to me. We talked about sax players. Sonny Rollins I remember in particular. He was very much a gentlemen.

Saw them in Detroit and Sofi last year. Caught Keith’s solo show at the Beacon. They still kill it and play a fantastic show. I convinced my buddy who’d never seen them to get a pit ticket in Detroit and now he’s coming to europe too haha. He was mind blown.

Took mushrooms at the LA show. It was insane hahaha. Started in GA pit and during JJF snuck up front. Was a particularly interesting show in the sense that it was 60 years to the day Mick n Keith bumped into one another at the Dartford station.

Great stuff! Thanks for sending this in, Mitchell!