UPDATE (about 4:30 pm): according to the man on the scene, 2020Joe, they also played Street Fighting Man, Under My Thumb, 2 times Sad Sad Sad, a short YCAGWYW without guitar and Angie … the opening video was also played/tested ..

UPDATE (about 4pm and later, Chicago time): apparently, the band is on styge right now, rehearsing Tumbling Dice (thx 2120Joe, iorr) and (I’m sure) other songs – they usually do this before gigs, so that the crew has a test for all the lightning and video features which have to work perfectly at showtime! Today it might just be a loose soundcheck, tomorrow or the day after they will do the ‘dress rehearsal’ and will play an extended set – er, I mean, they usually do … 🙂 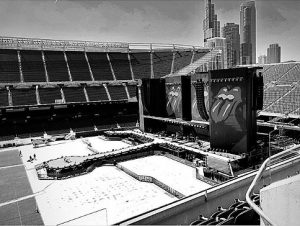 erbissell [iorr] sent us this b/w update – thx! – check out the huge PIT… it’s definitely bigger than in EU

Oh what a sight! I so much wish to be there!

The construction is well developed, it seems. It’s the same set-up we have seen in Europe lately – it’s fantastic! Those screens are just huge and wonderful – and the crew nicely uses it throughout the concert. You will love it! 🙂 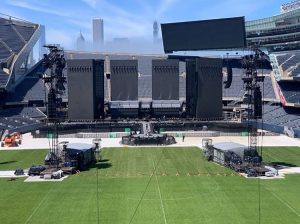 Thx for the pic erbissell [iorr]

June 18 – Good ol’ Bill German will tell anecdotes of his years with the band!

Author and Rolling Stones insider Bill German discusses his ups and downs with “the greatest rock ‘n’ roll band in the world.”  His book, Under Their Thumb, chronicles his unlikely friendships with Mick and Keith, and how he went from being a teenage fan (who approached them in New York City) to being hired as their official historian.  He traveled the world with them, stayed at their homes, and witnessed their private jam sessions, decadent parties, and vicious in-fights.  He’ll share his humorous anecdotes and never-before-seen photos at Transamobia Studio on Monday, June 24, at 7 pm.

THX for the tip, LuvGlimmerTwins [sdb] 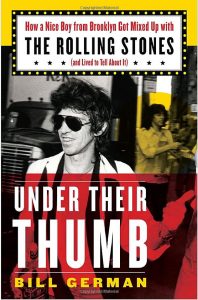 June 18 – Ronnie greets us from Chicago!

He tweets: “Sweet Home Chicago! Can’t wait for the #StonesNoFilter tour to start this Friday in Chicago! Who’s coming to the shows?!”

Sweet Home Chicago! Can’t wait for the #StonesNoFilter tour to start this Friday in Chicago! Who’s coming to the shows?! pic.twitter.com/HJZzRtU1zf